← Scraptastic Saturdays – Then and Now
The Festival of Trees! →

Jack-o-lanterns, and racism, and chihuahuas… oh my!

So yesterday I didn’t post my photo.  Sorry everyone.  I wasn’t feeling great in the evening, and by the time we got home from doing a bit of grocery shopping (that we had to stop early because of how I felt) I just crashed right out.  I did take a picture though, so am posting it now.  🙂  Believe it or not our little pumpkin head is still in one piece on our front step.  LOL  I guess he doesn’t have to join his “friends” in the compost just yet.  😉

Jack froze his buns off (and everything else off for that matter).

Now onto something more serious…

I’m always surprised at the comments that people feel completely entitled to make as long as it’s prefaced with “I’m not racist, but…” or “I’m not homophobic, but…” or “I’m not _____, but…”.    To some  degree I’ve come to expect things like this from earlier generations, it still bothers me BUT I’ve come to accept it.  I don’t agree with it, but I realize there is likely little I will do to change their views.  However, to hear this from someone who is younger than I am just shocks me.  Perhaps it shouldn’t, but it does.

Why do I bring this up?  It’s been bugging me for a few days.  I was having a polite conversation with an acquaintance who prefaced a statement with one of the aforementioned qualifiers…  then proceeded to blurt out several racist stereotypes (which I won’t repeat).  I probably had a completely dumbfounded look on my face as I stood there in shock for what felt like an eternity, because he nudged me and asked “ya know?”

I really thought this type of thing was something people my age (and especially those younger than me) had moved beyond.  The idea that someone who would have grown up in the same culture I had would still be holding onto ideas like this just totally threw me for a loop.  You can complain about a specific person, a specific incident, without complaining about an entire race of people who are as diverse and eclectic as night and day.

I actually debated about whether to blog this or not.  The fact that I’m still bothered by it a few days later is what decided it for me.  It really hurt my heart.  I hope these things aren’t something my daughter ever has to hear.  The only  “I’m not ____, but…”  she should ever be faced with is this:

I’m not vegan, but I can’t argue with vegan baked goods… DELISH!

My rant over, here’s a picture for today.  Marnie (the cream and white Chihuahua puppy) tattling that the other Chihuahuas (blue tri-colour Roo and black tri-colour Ned) won’t share the pillow. 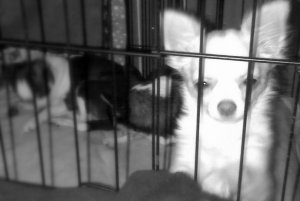 "I'm not a tri, but I deserve some pillow"

Tobi-Dawne Smith is many things to many people... photographer, canine behaviour expert, equal rights activist, green politician, lactivist, intactivist, writer, crafter, dog handler, third wave feminist, etc. But most important in her life is her role as mother to an amazing five year old. Learn more about TD at http://www.tobi-dawne.com/ follow her blog at https://td365.wordpress.com/ get to know her daughter at http://lilyannslemonade.wordpress.com/ or check out her work at http://tdphotography.me/
View all posts by Tobi-Dawne »

← Scraptastic Saturdays – Then and Now
The Festival of Trees! →