← Ready for whatever comes next!
Journal your Journey →

I have to admit to being in somewhat of an odd mood just now…  Had a couple things I was considering writing about, but in the end, I’m just too uncommitted to any of them to make a compelling argument either way.  Cosplay for example…  kinda cool or creepy and weird?  I’m honestly undecided.

On the kinda cool side we have this: 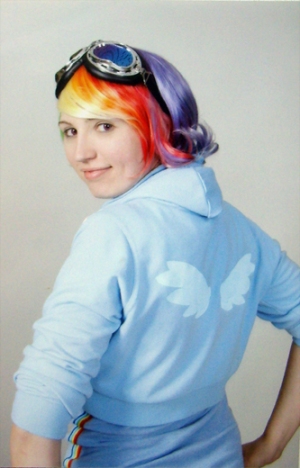 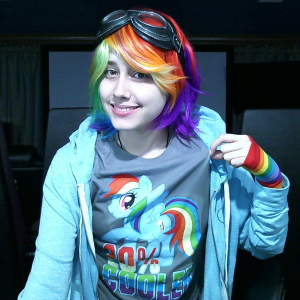 Okay, yes…  they’re both Rainbow Dash from FiM, but let’s face it.  She makes everything at least 20% cooler.  😉

Now, on the creepy and weird side we have this: 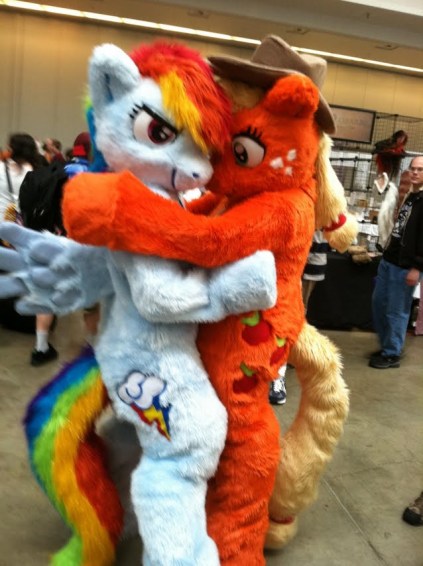 And while yes, it may feature Rainbow Dash along side Apple Jack…  even the typical coolness factor of RD couldn’t save this.  Yep.  Just way too creepy and weird.

Now because all three examples were from My Little Pony (ya had to know that if I was going to do a post on cosplay, it would mainly feature the characters from Friendship is Magic), I’ll toss one more out there.  Now, prepare yourselves.  This last image takes the cake on both the weird and the creepy.  No idea what this person was thinking, nor what character she’s attempting to portray from what show, book, or what-have-you…  but here she is (and don’t say I didn’t warn you):

…had to give you one last chance to turn away.

So…  while I think cosplay has the potential to be fun and harmless, there are folks like this poor individual who just take it to the creepy and weird level.  And it really is a whole NEW level of creepy and weird, thus ruining it for anyone who may be a fence sitter on the whole idea.  Because seriously, anyone who thinks THAT is awesome?  Well…  I think they may need some serious help (and I do hope they have someone in their life qualified to give just that).

Yep.  I’m just in that kinda head space.  Not committing one way or another.  Just trying to get my head around something I stumbled upon and not really sure where it all fits.

I was only able to track down a credit for one of these four images, so if you know who the others belong to, or you’re willing to own up them being yours, drop me a line and let me know.  I’m a firm believer in giving credit where it’s due.  In that spirit, the second image (the Rainbow Dash with the longer hair and rainbow arm bands) is Aisu, who does some great MLP inspired artwork which can be found here:  http://aisu-isme.deviantart.com/

Tobi-Dawne Smith is many things to many people... photographer, canine behaviour expert, equal rights activist, green politician, lactivist, intactivist, writer, crafter, dog handler, third wave feminist, etc. But most important in her life is her role as mother to an amazing five year old. Learn more about TD at http://www.tobi-dawne.com/ follow her blog at https://td365.wordpress.com/ get to know her daughter at http://lilyannslemonade.wordpress.com/ or check out her work at http://tdphotography.me/
View all posts by Tobi-Dawne »

← Ready for whatever comes next!
Journal your Journey →