Breaking the Silence – and 80’s Day

Well, we’re here!  The sixteenth annual Breaking the Silence conference at the University of Saskatchewan is tomorrow!  There is still time to register – though not much.  So if you haven’t done so, get’r done!  There really is no time left.  Get your registration done tonight!  All the details are here:  http://www.usask.ca/education/breaking-the-silence/index.php

And because you asked for it, I’ll be doing my session on understanding sex, gender, and orientation TWICE.  That means you’ve got an extra opportunity to get in on this discussion if you missed it last year.  And even if you did get in last year, because I conduct it as a discussion, it will never be the same as where we go is truly directed by YOU.

It was 80’s day at Kid kid’s school today.  Normally I’m all for spirit days and getting dressed up.  But an 80’s day?  Two thirds of everything that the cool kids are wearing these days are totally 80’s inspired – which means every day is 80’s day.  Seriously, every item the girl wore was out of her usual wardrobe.

That said…  the 80’s were about excess…  so we loaded on the bangles, we loaded on the belts, we loaded on the hair spray…  and we added slouch socks – because that’s one style that didn’t make it back.  And because it’s Thursday, that meant that I had to get dressed up too, after all I couldn’t spend the afternoon at school and NOT take part in 80’s day.  LOL  So I found the perfect jacket (and stuffed socks under my bra straps to mimic shoulder pads), pulled on some black leggings, a gold lamé skirt, and again with the slouch socks.  Then we did our hair and make-up… everything in excess!  It was great.  😀 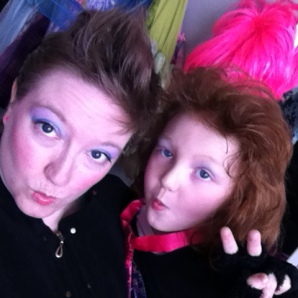 The girl and I, with our 80’s popstar diva duck faces. 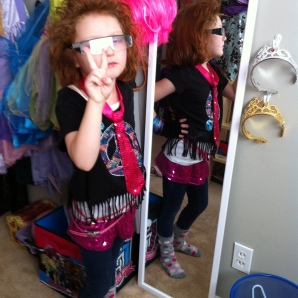 Fabulous, and she knows it! 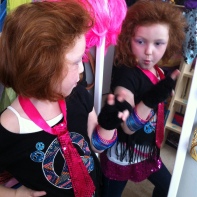 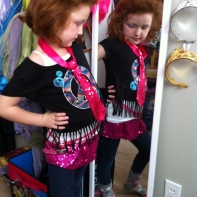 Girl knows how to work it! 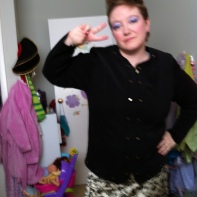 Me, with my huge shoulders and huge hair!

I’ve spent the last couple of evenings sitting on the floor in my parent’s basement, going through old boxes of my things deciding what to keep and what to toss.  So far I’ve sorted through everything packed away in grades two, three, four, and five (and a box of miscellaneous stuff).  I was an interesting kid.  LMAO

Going through the boxes from grades two and three had me laughing…  a lot.  The artwork was so demented.  LOL  Pictures of animals stabbing other animals, people being eaten by sharks, Mr. T made several appearances – always in action saving someone.  And then there were the pretty pictures of My Little Ponies and unicorns (that helped to balance out the crazier killing spree illustrations).  And reading my school work it was evident that I was completely content and at ease there.  I’d written letters to my teachers and the principal telling them how awesome I thought they were and how I was going to “tell my mom to buy them anything they wanted.”  It was great.

Tonight things weren’t quite so entertaining.  There were still moments that brought a grin to my face – like discovering an old MASH game paper that had me married to Micheal Jackson, poor, and living in Hawaii…  but hey!  It did get the “one kid” prediction right.  But generally there had been a shift.  My school work went from marks of 96 to 100 percent down to a lot of sixties and seventies with a few nineties in language arts.  Many assignments handed in unfinished.  And the tone of my short stories changed, a lot of the hope that was there in grades two and three weren’t there in grade five.  My art work stared a lot of “pretty” girls with big lips and big hair…  but there was still a good measure of My Little Ponies, as well as unicorns and flying horses.  As I discovered gender more so to did my interest in it.  Grade four saw a host of characters there were described as “half boy, half girl”.

Over all it’s been an interesting couple of nights.  Still lots of boxes to go.  I have a box for every year of school I attended – from grades one to twelve anyway.  If I can cut things down, even by half, I’ll be happy.  We’re gonna get a big tub that can hold everything.  It’s time to find a place here to store it all, time to get it out of my parent’s place.  Sitting on the floor has my body a little upset with me but it’s easier to be down with all the boxes and piles (keep, toss, and undecided).  I may have to bring a camera along next time…  so I can capture anything worth sharing.  😉

And hey!  Know anyone who collects Dallas trading cards, Micheal Jackson trading cards, or any other cards from the mid-80’s?  I may have some they need.  LOL

Posted in gender variant, Just a Note, Nuthin' much, Our World, Parenting