I’ve been in a bit of a funk lately.  I’m sure it’s the weather…  we’ve been breaking records left and right for the cold and snow, records that go back as far as they’ve been recording temperatures here in Saskatchewan – and that’s 120 years of recorded cold and snow levels.

It’s not unheard of to have a freak snowfall in April…  but we’re not talking about an odd, one-off, Spring snow.  We’re talking about a Winter that appears to be never-ending.  We still have over a foot of snow covering most of the yard (and three feet in some corners).

I have seeds awaiting planting.  And I’m dying to be spending time with my hands in the good dark earth.  I need to put on a pair of clam diggers, and get out in the sunshine.  This weather is just making me feel like curling up into a ball and never emerging from my bed.

Normally I spend my birthday outside, having a picnic or bbq.  Heck, on several occasions I’ve spent it on the beach.  Never in my now 36 years have I been kept indoors by snow.

In spite of the weather though, I had the best birthday I’ve had in a very long while.  Lily-Ann insisted that she and her Daddy go to great efforts to make the day special – and I am so grateful that she did.  I love Damon, but he’s never been one to make a fuss or do anything to make someone feel important on their day…  which means I’d gotten rather used to having crummy birthdays.  LOL  If I’d had one of those along with this crummy weather?  I’m not sure I would have gotten out of bed.  😉

My girl really did make me feel so special.  She got her Daddy up in the morning and the two of them made me breakfast in bed – something I’ve never had in my adult life.  Then we all watched a couple episodes of Friendship is Magic before heading out to build-a-bear…  where Lily-Ann and I picked out, and put together, and chose clothing for a Pinkie Pie stuffy.  Whom is now sitting beside my bed being super cute.  On our way home we all got smoothies, then vegged for a while before Supper.

My parents had bought me a gift card for Persephone Theater, and with it I bought tickets for Damon and I to see Ride the Cyclone – a musical about a group of dead teenagers.  It was very well written, and had us laughing all the way through.  Some fabulous performances as well.  It was a great way to wrap up a wonderful birthday.

Okay.  Yeah.  I’ve been a really bad blogger lately.  Well, maybe not by most standards.  After all, there are MANY bloggers who post once a week or even less frequently.  😉  But for me?  This is bad.

I don’t know if it’s the weather, or just the physical exhaustion after working so hard getting Breaking the Silence up and running then following it up with a very physically demanding photo shoot…  Whatever it is?  It’s kicking my ass.  I’m just done.  So I am VERY grateful that the Easter break is now upon us.  Not having to worry about our regular schedule, and getting the girl off to school, should help a great deal.  And even better?  The next couple of days we’re actually supposed to see plus temperatures!

I am so done with this cold and all this snow.  I am dying for it all to melt away.  I want to cultivate the ground.  This house has a nice big garden space (that was unused for who knows how long) and I’m just itching to get out there and plant something.  I have so many plans for the outdoor space here, and this extended Winter is making me a little itchy…  seriously.  I’m so irritable I’ve definitely got a case of cabin fever…  Spring just cannot get here fast enough.

Posted in Just a Note, Our World

Misadventures of a snowbound photographer

Tonight I have to direct you towards another url.  As I’ve already chronicled this particular misadventure on my photography website.  I do promise though, the many photographs of our frosty day are well worth the visit.  I know you’ll laugh as much as we did as we battled the environment to get these important shots. 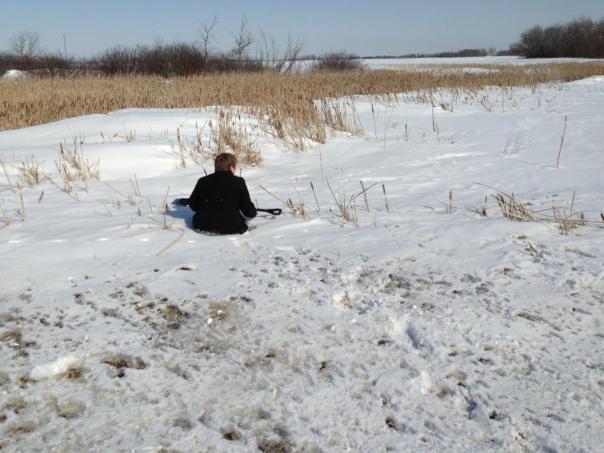 Hip deep, completely stuck, immobilized by the snow and ice.

And a big thank you to Jamie for not only volunteering as my assistant today, but for capturing the entire thing with her iPhone.  LMAO

A hat and scarf kinda day.

I’m exhausted.  My sister in law, Tabatha, and my niece Eliana and nephew Leandro just left.  I got the girl ready for bed, and Damon is in there reading to her.  Normally I’m in there too, but this is a book he picked out and is reading to her – and I don’t want to interfere.  While it’s not the first time he’s read to her (he had to take over when my TMJ got so bad that it forced me to stop reading out loud) but this is the first book he picked out and bought for her, so it’s kinda special.  🙂

Yesterday’s challenge photo was “letterbox”, which I’m assuming is the same as a “mailbox”.  😉  So here’s ours.  It’s dirty, dusty, and dinged up…  but it’s cute and charming just like the rest of our new house.  And hey!  It even had some mail in it when I snapped this picture:

Today’s challenge was to photograph something I wore.  Well…  I didn’t have to give this one much thought.  With my hair badly needing to be washed (it’s super flat and greasy right now, just ask my SiL – whom I’m sure was amazed I’d be seen with it like this) I threw my hat on before heading outside earlier today.  I really love my hat.  And with the weather unseasonably warm for January (try -10 or -15 when it’s usually -30 or -40) I haven’t been having to wear a super heavy scarf.  So I threw on the one my sister Riki and her girlfriend Kate bought me for Christmas, it’s right up my alley and I just love it.  Here they are: 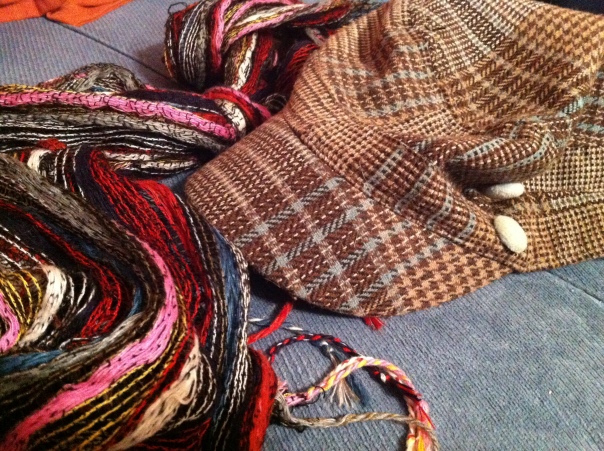 Just found your way here and have no idea why I’m sharing pictures of such unusual items?  Check out the January challenge list below:

Wishing you all a Yule filled with love, hope, and wonder.  May the joy of the season remain with you through the darkest days of Winter and carry you through until the sun returns to warm the Earth.  Merry meet and blessed be!

December is Almost Upon Us.

I don’t know about you, but I could use another couple of weeks before December.  YIKES!  How on Earth did it jump from November 10th to November 25th so quickly?  Way too many holiday projects are about to become due in no time flat.  I had plans to make our own little advent calendar for the girl, but I’m now wondering if I’ll have time to do all the sewing I’d planned to.  I may just have to cut some corners and find little pre-made baggies to put each days “treasure” in.  LOL  Well, either way, I’ll get something put together.

For now I intend to put on some super comfy warm holiday themed PJs, pop on a show, grab a puppy or two, something yummy to snack on, maybe my husband, and cuddle into the bed.  The temperature drop today definitely says “holiday’s a’comin”, and rather than pump the furnace into high gear just yet, I’m retreating for the coziness of a very full bed.  😉

Another fabulous Sunday with the family!  Ever since we started setting aside Sundays to do something special with the family they’ve become awfully wonderful.  And while it’s not always easy coming up with something we all want to do, AND that sticks within a small budget, it’s worth a little work finding things.

Today we headed down to the Saskatoon Farmer’s Market for some early afternoon treats.  Baked goods, home made ice cream, and greenhouse produce – always a hit with our family.  Then we hopped in the car and headed out to the Forestry Farm Park and Zoo for an outdoor adventure.  Because, let’s face it…  taking a four year old and a 17 year old to the zoo together is ALWAYS going to be an adventure.  LMAO  Especially with Damon and I along for the ride.  😉

We made a snowman (yes, at the zoo).  Made a whole row of snow angels.  Had an hour long snowball fight (it lasted nearly the entire time we were there).  Found a huge branch on the ground buried under the snow and made a bunch of wands from it.  We wrote in the snow.  Cast spells on one another.  And giggled at the baby lion cubs as they climbed on their mother.

It’s no secret that with January comes my annual case of the blahs.  The holiday festivities are over, there is little going on, it’s the coldest month of the year, and my thoughts are of Spring and the fun of the dog shows that come with it (yet it’s still too far away to really begin any of the planning or fun).  There are good things in January…  like my Dad and my brother’s birthdays – both which happen to fall on the 11th.  But over all?  I’m happy it’s drawing to an end.  I am SOOO ready for February! 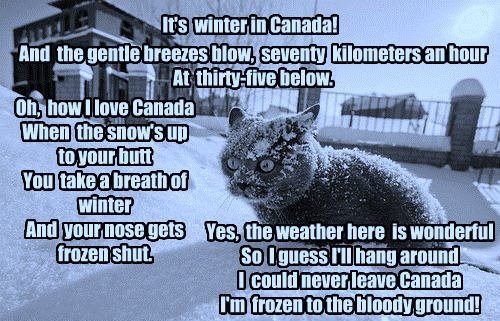 Posted in Just a Note, Our World

I’ll be honest.  I’m a little too brain-tired and body-weary to write much tonight.  In the afternoon we headed out to Winter Shines, an annual Winter festival here in Saskatoon.  The girl got to go for a pony ride, and visited with a bunch of animals at a mobile petting zoo.  We checked out a bunch of amazing ice sculptures, and took pictures on the ice throne.  After checking out some of the goodies at the farmers market (which is located right on site) we each picked out a treat to snack on, and then headed out to Diefenbaker hill for some serious sledding.  We took my youngest sister home and snuck in a visit with the ‘rents before heading home for some supper and a little Princess and the Frog (a la Disney).  But before any of this?  I got a little scrappin’ in.

Today was a wonderful day.  We created all sorts of new memories, and I got to scrapbook another great memory from this past Autumn.  All in all?  I’m a happy camper.  Days like this, full of family, really do rock!

I had a lovely time with Pat and her family on Sunday afternoon out in Gabriel Dumont Park.  It’s one of my favourite spots to do family photographs ANY time of year, even when it’s -20 out.  Thankfully it was substantially warmer than that, as we’re having the warmest Winter Saskatchewan has seen in my 34 years, so while we were all starting to get red cheeks and cold hands by the end of our hour together, we managed to get all the way through without complaint.  Well…  except for Shmee, who was unimpressed by the whole thing.